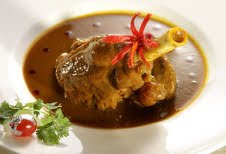 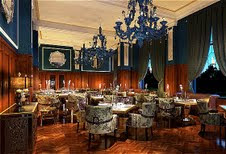 There's a true story in the world of sneakers. It's a long one and you can Google it if you have the will or the time but basically it involves two German brothers. The Dassler brothers. Named Rudolf and Adolf, these two became estranged mainly as a result of their differing views on Hitler and the nazi movement in the 1930's. At the time, they were involved in shoe-manufacturing. After the fall-out, Rudolf left to set up his own company (Puma), while Adolf stayed behind and re-named his shoes, Adidas (Adi Dassler - see what he did there?) What makes the story really cool, as these two went head to head, was the close proximity of their factories. The story goes that they could actually see each other across the Aurach River. So what does this have to do with anything? And why did it pop into my head when I ate at The Bombay Brasserie last week? Well my lovelies, the extra spice *ahem in the question "where is Cape Town's best Indian restaurant" lies in the close proximity of two if its contenders.
Just down the drag from the newly renovated Bukhara, Bombay Brasserie has opened to generally glowing reviews. I stopped by last week to check it out and was impressed for a few reasons. Firstly, the staff. Everybody was world-class. In particular, Phineas, who we were lucky enough to have serving us. He was brilliant. In fact, I would go so far as to say he is the best waiter I have ever had. Thumbs-up to the man.
The decor is plush, and serves as a good indication for what they are trying to achieve at Bombay Brasserie - which is elevating Indian food to a fine-dining level. (Something, as pointed out by JP Rossouw on his blog, Bukhara achieved when they first opened their doors, many years ago.) There's soft lighting, show-stopping chandeliers, thick velvet curtains, white orchids, oversized mirrors, rich wallpaper etc. adding to a good feel. One plus, for me, is the size. At only 40 covers a night, Bombay clearly has the edge over Bukhara in terms of creating an intimate and elegant dinner. The flip side of the coin being that the atmosphere was quiet. Almost too quiet. Bordering on dull.
So...the food. With diners being encouraged to share, we did just that. Starters were both vegetarian and consisted of apricot and potato cakes (perfect texture) and steamed lentil dumplings. The dumplings were phenomenally light - a result of being held together by just a hint of chickpea, rather than an overpowering binding agent.
For mains we enjoyed a lamb shank, cooked in a saffron broth, and a prawn masala. The shank was put in front of me. I reckon I could've made the meat fall right off the bone if I stared hard enough. Meltingly tender and beautifully seasoned with the delicate saffron. The prawns, as is often the case with a curry, was a battle between aromatic vs. hot - the latter winning pretty comfortably. Our side dishes were a garlic naan bread (too small but thoughtfully cut into two already) and beautiful sauteed spinach with fried garlic. I didn't know spinach could be that good and owe it mainly to the consistency they achieved; almost a puree but not quite.
Desserts are often relegated to an afterthought in Indian eateries but we ended off with some cardomon ice cream, which certainly deserves praise.
Something worth mentioning is the strong emphasis on wine pairings which I found refreshing for an Indian restaurant. With so many spices and flavours on offer in each dish it is a sommelier's dream and I enjoyed hearing the thought processes behind the selected wines. The added bonus is a good selection of wines by the glass, albeit at fairly steep prices. We enjoyed some Teddy Hall Reserve Chenin Blanc 08. Shame...
The place is hard on the wallet and I can already hear people complaining about portion sizes. At R350 -R400 per head it is unashamedly positioning itself in the fine dining category. I'm interested to see who wins the Bukhara Bombay Brasserie Battle.
Cheers,
Jamie Who
P.S. I tried to get some pics but the romantic lighting made it tricky and a flash would not have done it justice. I'm going to try and source some though so please be patient.
Posted by jamie who

Bukhara isn't fine dining, it's just expensive. Clearly Bombay Brasserie is in a different league and you're comparing Apples and Pears really.

Anon, I know BB is better quality-wise. The question is, will people be willing to pay? Both are Indian restaurants so I reckon we are comparing apples to apples. Maybe just average, overpriced apples to really good ones!!

Jamie, you did not tell us out of towners where to find the place.

No contest! My vote goes to Bombay Brasserie.

The food is delicious, fragrant and delicate, the beautifully balanced flavours spot on.
Service is charming, friendly and attentive.

Charleen - its located on the ground floor of The Taj Hotel, Wale Street

Sorry Charleen. My bad. Michael, thanks for clearing that up!