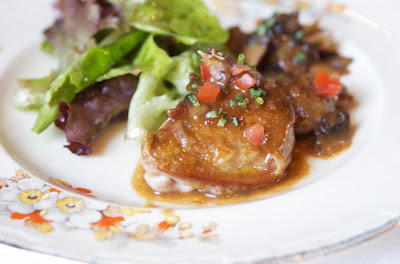 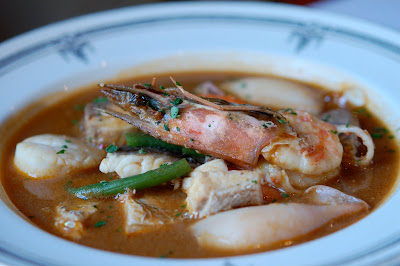 The last time I visited Stellenbosch I wrote about how disillusioned I was with all the franchise food stores. (Vida, Melissa's etc.) I eventually stumbled across Nook which restored a bit of faith in my belief that there were some good, rustic eateries in the town. A further visit revealed Cafe Dijon, which definitely raised the culinary stakes. But my most recent visit took things to another level, and I haven't enjoyed a restaurant as much in a long time.
Christophe's is the latest venture for chef Christophe Dehosse, who previously worked at Au Jardin at The Vineyard Hotel. That was a few years back and in between now and then he founded and set up Joostenberg Bistro, which built up a great reputation as home of all things pig. He has now moved on and left that in the hands of his wife Susan. His new place is a bit more serious but remains unpretentious, with the decor being a mixture of soft, pastel walls and a collection of varied artwork (for sale.) White linen tables and imported cutlery let you know you are in the hands of someone who cares, as does the highly-professional and well-informed waiter/manager.
The menu is reassuringly short (indicating a chef who focuses on fresh, seasonal ingredients) and lists five starters, five mains and a handful of desserts. The wine list was also a great collection and listed quite a few nearby, boutique farms. There was - understandably - a strong Joostenberg presence.
I tried "pan-fried quail salad" to start, which was served as quail with a side salad. A simple dressing of blanched, cubed and deseeded tomatoes and chives brought the dish together with the help of some sauteed porcini mushrooms. The Queen's starter of a cape salmon tartare was one of the finest starters I can remember having. Anywhere. I have never seen this fish served as a tartare but the texture worked amazingly well and I am surprised more chefs aren't trying it. (Upon reflection, I think it worked even better than Bizerca Bistro's yellowtail version, which I have enjoyed often.) Just the right amount of acidity came through from a fantastic dressing, and it was cleverly garnished with onion sprouts that added flavour, not just "prettiness" to the dish. Mains were a bouillabaisse for me (rich, deep flavours with prawns, a beautiful plump scallop, calamari and both cape salmon and Kabeljou) and a pan-fried Kobeljou, served on lentils with a mustard dressing, for The Queen. (Both dishes worked outstandingly with a bottle of Miles Mossop Saskia by the way...if you feel like a treat.) Desserts presented the only stumbling block in the form of a gooseberry creme brulee, which was far too sweet and over-caramelised i.e. burnt. That said, the chocolate fondant was sublime. Moist. Rich. Gooey. Decadent. Brilliant.
If ever you are in Stellenbosh (and in fact even if you're not) make a plan to find time to eat here. It's a great find. Find it at 44 Ryneveld Street, or call them on (021) 886-8763 .
Cheers,
Jamie Who
P.S. Special mention must be made of the crockery, which I absolutely loved. They are quirky, vintage pieces and they make eating such high-end food seem totally unpretentious. A very clever touch.
Posted by jamie who

Speaking of the winelands...have you ever been to Cognito Restaurant in Stellenbosch? If so, what did you think?I went there a year or so ago and thoroughly enjoyed it. But I haven't been there for a while and wonder if it's still top notch? Would love to read your review on it!