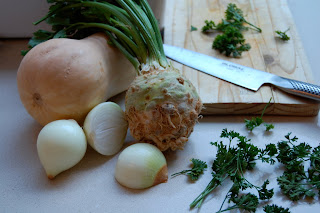 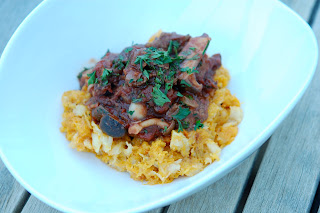 I had a good giraffe (laugh) the other night, watching TV. There's a show on BBC Food which is all about how some people are scared of food. Like, properly terrified of it. The particular episode I watched had a dude who freaked out every time you brought fruit or vegetables anywhere near him. I'm not kidding. He started sweating, shut his eyes and blocked his ears. It was truly bizarre and I laughed unashamedly. As the programme went on I realised it wasn't supposed to be funny. Not that this made me stop laughing. What was interesting to me was the reason the guy was so scared of the fruit and vegetables. You see..he didn't know what they were. He was scared of the unknown. Once I had figured this out the show became a lot more interesting to me. I say this because I am constantly trying to explain to people not to be scared of food. You can't learn unless you try things. Use ingredients you aren't familiar with. Buy whole foods and unusual cuts of meat. Get inventive. You'll find out soon enough the recipes you can come up with are limitless.
A good example of a strange looking ingredient is celeriac. I spotted some in Woolies the other day and used it to take a pretty standard dish to a level that made it interesting. Here's how:
Stuff you'll need to feed 2:
Okay, what to do:
1. Preheat your oven to 20o degrees celsius. In a deep pot fry your beef in olive oil until browned. Remove meat and set aside.
2. Add onion and the mushrooms to the pot along with the red wine. Cook for a minute and add the garlic and chilli. Cook for another minute and add the tomatoes and the water.
3. Return meat to pot, bring liquid to the boil and reduce heat to a simmer. Cook on a medium to low heat with the lid on for as long as you can. (3 hours or more is ideal. If you don't have time make sure it is at least 1 hour. Anything less and the meat will be tough). About 45 minutes before serving remove lid to allow liquid to reduce and thicken. Add the parsley at this stage.
4. Place the butternut and celeriac in a roasting tray. Drizzle with olive oil and add the paprika and cayenne pepper. Season with sea salt and black pepper and shake to make sure vegetables are covered. Cook for 20 minutes, remove and shake. Cook for 25 minutes more, remove and mash.
5. To serve spoon celeriac/butternut mash into deep bowls and pour over some of the stew. Garnish with parsley.
The celeriac is a funny-looking thing but it adds a great depth of flavour when combined with butternut. Together they work as a beautiful alternative to mashed potato and visually the dish is more attractive. How smooth you make the mash is up to you. Personally I like to leave it looking a bit rustic - I think the extra texture is a bonus. Of course, it's also a lot healthier than mashed potatoes which is another plus.
There you have it. A nice little winter dish with an ingredient that you really have no right to be afraid to use. Give it a shot. What's the worst that could happen?
Cheers,
Jamie Who
Posted by jamie who