Twankey Bar - You will be sick of me very soon 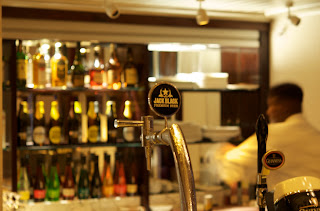 We've spoken about the foodie club before. It's a weird bunch. I'm a member. You're a member. You also get fake members. Or, as I like to call them, wankers. These people are the ones who order the most expensive bottle of wine instead of the best. They are also convinced they know everything there is to know about food. Real members of the club (yes, that's me and you in case you haven't gathered so far) are aware that you can never know enough about food. There are always new techniques, trends, flavour combinations etc to learn. And what happens when you do discover something new? Well...it's a revelation of sorts. Last night, having a few drinks before eating at Bombay Brasserie, (review to follow) it happened to me.
We'll get to that just now though. Let's first talk about the general vibe at Twankey Bar, on the corner of Wale and Adderley. As part of the Taj Hotel they have done well to create a separate entrance. So you don't feel like your sitting in a bar at a hotel. Nice. Inside the eye immediately takes in the beautiful marble bar. It's a beaut. There are raised, cushioned chairs instead of uncomfortable stools, lower versions, some leather wingbacks and one or two booths. The place is sexy but discreet at the same time. Like Mrs. Jackson who taught me Chemistry all those years. Annnnnyway...that's neither here nor there. What becomes quickly obvious at Twankey is the attention they have paid to the food. And in particular (and here comes my "light form the heavens" moment) the pairing of oysters with Guinness. Wow. I had never tried it but was instantly hooked. Something about the thick, velvety Guinness and the delicate oyster was..well..it was f-ing amazing. As explained by James, the food and beverage manager for The Taj, it is their intention to introduce this to as many people as possible. In fact - and don't tell him I told you this - if you go there right now and order oysters they bring you some Guinness. For free. To try. With the oysters. For free. With the oysters.
The rest of the menu is vastly superior to any other pub fare I have seen in this country and had things like quail sitting happily next to chilli poppers.
With Jack Black on tap and the entire &Union range proudly on display, you know where to find me on a Friday from now on. And Thursdays. Because it's Phuza Thursdays. Maybe Wednesdays. Because let's face it Wednesdays are the mini-Fridays. And Saturdays. (Did I mention there is a nice big TV showing sport?)
With brilliant service, a winelist that clearly champions the little guy, a passionate manager and a vibe that generally just makes me feel skoochie inside, Twankey has jumped to my number 1 spot in terms of after work drinks. According to James they are going to be very strict on how many people they let in on a busy night. Just another reason to leave work early tomorrow.
Cheers,
Jamie Who
P.S. I did take more pics than this but I'm having some camera issues. I'll try and get them up tomorrow.
Posted by jamie who

Love Twankeys and LOVE your blog. I check it 3/4 times PER DAY!

My first ever oyster & guinness experience was in a quaint pub just outside Galway, Ireland- it's a well-known culinary experience for all visitors to Galway... really great!

Eefs, thanks for the support. Keep reading and please let me know if you'd like to see anything specific...

Hey Steph, yip, apparently they have more than 15 000 oysters there at some weekend festival. Sounds mental. Drunk Irishmen with aphrodisiacs.