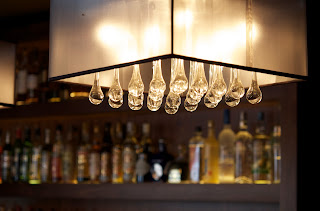 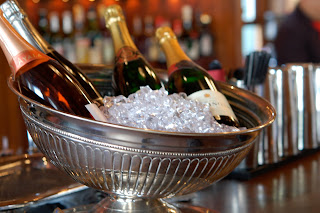 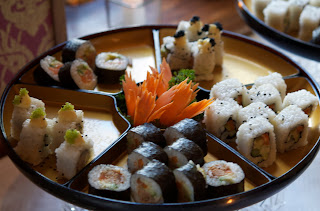 The words "all you can eat" and "buffet" - when used in one sentence - are generally enough to strike fear deep into my soul. I stay way from these offers the same way I wouldn't go to Pep and buy "all the clothes I could wear".  The point I'm making is that quality, as a rule of thumb, is compromised at these special offerings. But, as they say, there is always an exception to the rule. In this case it is Kitima in Hout Bay.
I used to go there for their Sunday buffet pretty often. Too often probably. I got a bit tired of it. But, after enjoying a birthday party for The Gym Nazi a few weeks ago, and after seeing their new cocktail lounge, I was keen to give it another go. I had given it more than a year and figured I was ready.
Those of you who haven't been to Kitima will be floored by how beautiful the decor is. The venue is an old manor house and the place has been beautifully restored in a combination of colours and fabrics. Deep reds and blues are offset by delicate silks, lavish ornaments and over-the-top mirrors with gold frames. There are thick carpets running along dark wooden floors, stunning details on pressed ceilings and a new outside area beneath a bedouin tent. The new cocktail bar (I think it's called Raya Lounge?) is also a skoochie addition and a perfect place to have drinks before your meal. Or after. Or during. Or before, after and during.
I have never eaten from their regular menu but in terms of what they throw out for a buffet you are spoilt for choice. There's sushi, duck springrolls, steamed dumplings, fried wontons, wok-fried noodles, tom-yum soup, pastries, green curries, beef stews and more. With nobody being able to tell me where the meet came from I stuck to sushi and vegetable dishes and nailed a creme brulee or two at the end. While nothing was mind-blowing, nothing was disappointing and at R195 per head I've got to say it is still the bargain I remember it as.
As I have a habit of doing, I made up for the savings on food by ordering expensive wine and drinking too much of it but they had Moreson 2008 Premium Chardonnay. I mean, come now. If you can control yourself better than I did you can leave having enjoyed brilliant value-for-money.
The buffet ends at 15h30 so book early (we went at 12h00) and settle in for a long, boozy lunch. There's no rush. I mean...it's Sunday. In Hout Bay.
Cheers,
Jamie Who
Posted by jamie who