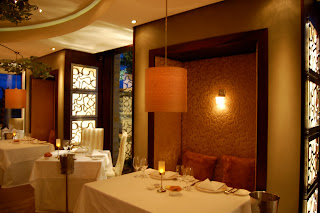 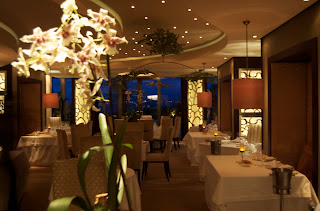 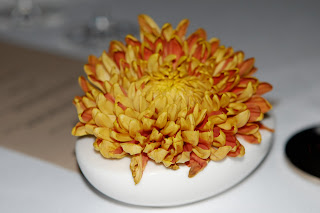 If you follow me on Twitter (and why wouldn't you, I'm hilarious) you would have picked up by now that I'm swanning my way through the Garden Route at the moment. Last night I took time out from eating amazing food and drinking expensive wine at home to go to a restaurant. Where I ate amazing food and drank some expensive wine.
The venue was Zachary's, Pezula Hotel, Knysna. Expectations were high. The problem with having such high expectations though - I've discovered in the past - is that they are often not met. So it gives me great pleasure to announce that not only were mine met last night, they were exceeded. And then some.
The first thing that struck me upon arrival was the restaurant's warm decor. Interesting "tree" sculptures hanging above tables, modern art on the walls, awesome booths that had been cut into walls and padded and the obligatory white orchids made up the look. Lighting is soft and while maintaining an aura of "this place is the real deal" you feel very welcome at the same time. Service is world-class and consistently impressive. The valet dude (jokey). The hotel receptionist (chatty). The barman (funky). The sommelier (smiley). The general manager (witty). Every single person was on their game.
Onto the food. We were presented with the set menu for the night which included an amuse bouche of smoked salmon and dried fig, free range quail with pomegranate and marula nuts, Chalmar sirloin with smoked potato puree, green beans and roast garlic, a chocolate banana cupcake with butter toffee mousse and chocolate ice cream and petit fours consisting of white truffles, mini coconut cakes and chocolate shavings. At R275 per person, I can go on record as saying it was the best value-for-money I have seen. Anywhere. Ever. The Queen, Pafoof and The Dragon all opted for this and two of them couldn't even finish their meal, such was the generous portion size. (I obviously ate what they couldn't manage.) The Bear opted instead for a beef fillet from Karan which was the only disappointment of the evening. Under-seasoned and some of it way too rare for the medium he ordered. (What's that? Who ate it? I did. What's your point?)
And then there was my meal. Wow. Kicked off with a rabbit terrine which was perfect in texture. Not the gelatinous mess that some can be. Seasoned well, and held together with a beautifully smoked strip of cured pork. Fantastic. Next was a roasted duck breast which was served with a parsnip puree, the smallest baby beetroot I have ever seen and baby shitake mushrooms so delicate they were kept raw. At this stage I felt my review was going to be more of a love letter so I started looking for faults. I found none. And if I was impressed, I slipped quietly into delirious with the arrival of my dessert. A white chocolate tart with..wait for it...roast butternut ice-cream. One of the stand-out dishes of my short career. As a combination the flavours married beautifully and I got - I think - a small taste of what people probably experience when eating Heston Blumenthal's food. My eyes and brain were seeing butternut but my tastebuds were getting ice-cream. The whole thing was almost surreal. Truly an unforgettable plate of food. Oh, did I mention I was sipping Hamilton Russell Pinot Noir 2004 and Thelema Cabernet Sauvignon 2006? Yeah, that added to the occasion. And on the subject of wines, theirs must surely rate as one of the best in the country.
All in all, I wouldn't just recommend Zachary's, I would insist on it. Yes, the regular menu might be a bit pricey but it's an experience. The chef, Goffrey Murray, is so dedicated to source local seasonal produce that he has started growing them himself. With local fruit, vegetables and herbs on his doorstep the food speaks for itself. He didn't quite crack Eat Out's top 10 restaurants in their 2009 edition, but with this quality of food on offer he is surely not just knocking on the door. He is banging it down.
Call them on 0443 02 3333.
Cheers,
Jamie Who
Posted by jamie who

Nice to see you visiting the culianiry delights we have in the garden route!! Don't miss some of the others when you come down next time....Fynboshoek for the best cheese, La Locanda for the best Italian, the Roastary for the best coffee, Sage at Hunters for the magic, Packwood for the Sauv Blanc.....there are many more places to explore