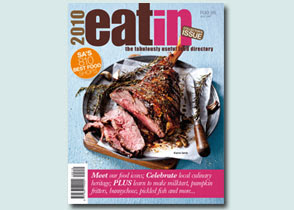 Do you know who George Jardine is? How about Bruce Robertson? Luke Dale-Roberts? If you're a foodie then you probably do. But what about Wayne Rademeyer? Do you know him? And Swepie le Roux? Sound familiar? I thought not.
The first few names above are celebrated chefs within the South African food scene. The last few are two winners of the recent 2010 Eat In Awards which I attended a few weeks ago. The fact that the average South African has absolutely no idea who the real food heroes in this country are (they're the ones putting in hours of unrecognised work to provide amazing produce) was the backbone for Eat In magazine and its creation. The publication aims to showcase the best suppliers, bakeries, butcheries, markets, farmstalls, cooking schools and delis we have to offer, and awards prizes for the best in a variety of categories. This year they hosted a lunch to hand out the awards and it was an honour to share a room with the eventual winners. Men and women whom I respect enormously.
The lunch itself was a laid-back affair and took place in The Food Corp premises, which is on the seventh floor of the central building in Black River Park. It's a funky venue and one to remember for anyone looking for something a bit different. Food was provided by A Sense of Taste, with a few of the ingredients being provided by the producers. Wine was provided by Waverley Hills (winner in the organic category) and unlike most organic wines I had no problem drinking it. A lot of it. I was seated next to the gorgeous hostess Justine Drake who seemed to be playing her usual game of "making Jamie Who blush as much as possible", which she seems to love. She's also very good at it. The wine was my coping mechanism and worked fairly well. Maybe too well, as I did later find myself pouring a glass of wine at home with the cork still in.
I was seated across the table from Pete Goffe-Wood and Abigail Donnelly and it was awesome to talk about all things food for hours. I also sat next to the guys from La Petite France who won an award for their brie. (You can get this from the Neighbourgoods Market so look out for it.) We enjoyed fat wedges of it with various preserves and, of course, the Waverley wine. I've also found their camembert at the market so try get your hands on that too.
The list of winners can be found on the Eat In website. Buy the magazine, have a look at the smaller, independent producers and do your best to support them. They're the guys making food with love and passion.
Cheers,
Jamie Who
Posted by jamie who

I had the privilege a couple of years ago to attend a celebratory dinner with Swepie Le Roux and his daughters held at their restaurant at the time, Jemima's in Oudtshoorn. This was just after they won a space on EatOut's Top10 awards.

The 7 course feast with the family and some selected guests lasted until 2am, and almost caused some missed flights.