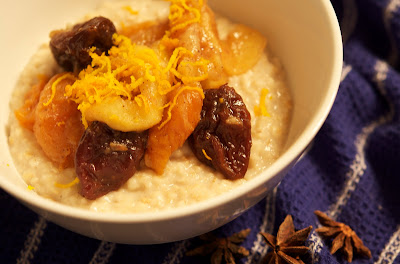 Winter is here. I think it's official. I tried hanging on for as long as possible but every day 5 o'clock rolls around and I'm thinking about stews, soups and slow-roasts. It's here guys, deal with it. Down in Cape Town this means the sky starts leaking rain and the temperature never gets above 15 degrees. It's grey every day and the leaves on the trees are gone. It can be depressing. But you know what? It doesn't have to be. I knocked up a hearty breakfast this morning that The Queen described as "smelling like Christmas". I loved that. It proved again that food - and cooking generally - can have a big impact on our moods. If I had poured a bowl of cereal and milk I would probably still be miserable. Instead, this recipe has left me feeling ready for a big day. I adapted it from Gordon Ramsay's book Healthy Appetite, which I love. The book proves that healthy cooking doesn't have to be boring cooking and this principle is fundamental to what I aim for with most of my recipes.
Stuff you'll need to feed 4:
For the compote:
For the oats:
Okay, what to do:
For the compote:
1. Place all the ingredients except half the orange zest in a small saucepan. Bring to the boil, reduce heat and simmer with the lid on for about 10 minutes. You want the fruit to become plump by soaking up the liquid. If it becomes too dry too quickly just add more water.
2. Strain through a fine sieve to separate whole spices and return fruit to liquid. Keep warm.
For the oats:
1. Place all ingredients in a small saucepan and bring to the boil. Reduce and cook until done to the consistency you like. (I like to cook my oats until they creamy so I will add more milk/water as I go) You can also cook it in a microwave but I like the control of temperature I get with a stove.
To serve, divide oats into bowls and spoon compote over the top. Garnish with remaining orange zest.
There you have it peeps. A healthy breakfast big in fiber and anti-oxidants, with slow-releasing energy. It'll keep you going all day and it's super-easy to make. Just get up 10 minutes earlier. Stop your whining. You'll thank me later.
Cheers,
Jamie Who
P.S. For a Saturday/Sunday brunch I reckon a shot of whiskey would be awesome in this recipe. No kidding. If that doesn't warm you up, nothing will.
Posted by jamie who

Love the spicy touches in your compote - will steal the idea for my own breakfast next time.

I would gladly wrap my frozen hands around a bowl of that ......double yum!!!

Thanks for this post, I am a firm believer that there is no excuse for not having a good breakfast!

I also like my oats very creamy, the ideal ratio (according to me) is 1 part oats to 4 parts milk with a pinch of salt and sugar. The fruit compote with the oats looks like breakfast heaven!

What a really lovely recipe and I adore the shot.
Where did you get that blue tea towel? it makes the photo.
There's a great new chinese place in Rondebosh you simple must go.
Clare