Welcome "Unity", the newest addition to the ⋃ family 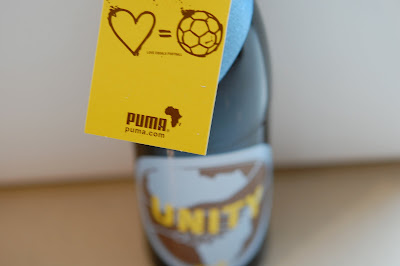 I read an awesome article in Monocle magazine a few months ago about Puma and part of their their branding strategy being to "own" African football. With Nike concentrating on technology and Adidas concentrating on performance gear, Puma decided African football was a great place to showcase the brand's unique flair and desire to push the envelope. One of the ways they chose to do this was to sponsor 12 African teams, including powerhouses Cameroon, Ivory Coast and Ghana. Another aspect was their Africa Unity campaign, which involved teaming up with artist Kehinde Wiley as well as a partnership with the United Nations Environment Programme. The campaign is typified by the creation of a special kit that African teams playing in the world cup will have the choice of wearing as their away strip (for those that don't know, each team has a second jersey that they wear when playing a team with similar colours). The kit is inspired by the African landscape and uses a transition of brown to blue as a metaphor for our continent's soil and sky. The numbers and the badge are in yellow to signify the sun. The badge itself depicts two hands shaking. When I read about the idea I was immediately interested. When I heard a further part of the campaign was a collaboration with the &Union team I was even more interested. Last night I went to the press launch to learn a bit more.
While the campaign is a brilliant concept, I was most intrigued to see how and why two brands with no obvious connection would fit together. The cynic in me asked the question "how on earth did the Puma guys get the idea approved at top-level?" A sportswear brand teaming up with a brewing company didn't quite make sense. After listening to an explanation from Puma's Marketing Director, Brett Bellinger, it became clear. Pretty much anything is possible with like-minded people driving an idea. The key to success was a total commitment to uncompromising quality and the end result is a limited edition beer that carries all the qualities you'd expect from Collective Sao Gabriel, Brewers&Union and indeed Puma. How does it taste? Like summer in a bottle. Quite light, with strong florals and honey on the nose and a crisp green apple aftertaste. It would be ridiculously good with smoked duck and fig, but would work just as well with prawns straight off the braai.
Wednesday sees the official launch. You would do well to get there. Lindiwe Suttle will be singing with a few of her friends and the vibe should be awesome. I might even have a word with The Big Guy to make sure the weather plays its part.
Cheers,
Jamie Who
Posted by jamie who