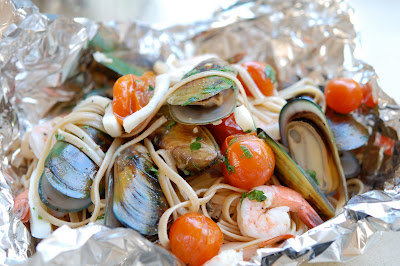 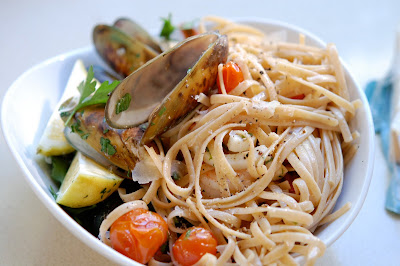 The cool thing about this recipe is that you can cheat. You can cheat as much as you want. For example, on Sunday I was nursing a fairly severe hangover so I bought already cooked prawns. Normally that's a bit of a cop-out for me but at that stage I honestly didn't care. You could buy frozen prawns that have already been peeled, or you could buy the real deal, cook them properly and de-shell them yourself. How much effort you go to with the mussels is up to you too. If you want to put on boots and scrape them off the rocks in Simon's Town by all means, go ahead. They will taste sensational. Because of the already-mentioned hangover I just bought some from Woolies. (Yip, you can do that now). They were green-lipped beauties from New Zealand and because this recipe calls for steaming them they were done in 5 minutes.
Stuff you'll need to feed 2:
Okay, what to do:
1. Preheat your oven to 200 degrees celsius. When ready, place your cherry tomatoes in a baking dish, drizzle with olive oil and season with sea salt and black pepper. Roast for 4o minutes, shaking every now and then.
2. In a very hot pan, fry your calamari in the chilli and garlic for 2 minutes per side. NO MORE. Remove and set aside. When cool, cut into strips.
3. Cook the pasta as per packet instructions. Drain, reserving about half a cup of the cooking water.
4. In a bowl, mix the tomatoes, the pasta, the prawns, the calamari and the mussels. Add some of the water from the pasta. Throw in the parsley.
5. Tear two thick pieces of tinfoil and lay them on a work surface. Carefully spoon half of the pasta and seafood mixture into the middle of the foil and using another piece fold in to create a "parcel". Before closing, divide the lemon wedges and throw them in. Close the parcel, making sure it is airtight. Repeat so that you have two pillowcase-looking foil parcels.
6. Place them in the oven and cook for 5-7 minutes. Remove and carefully peel back some foil to see if the mussels have opened. Return to oven if necessary but be careful not to overcook the seafood. Really, you just want the mussels to open and the flavours to all infuse a bit.
7. To serve, place parcels in a deep bowl, slash open the foil, add the pecorino, pour in some olive oil and extra parsley and eat. Glory.
The thing here is not to be scared of the mussels. With all the moisture in the parcels they should open up pretty quickly. BE SURE TO CHUCK OUT ANY THAT DO NOT OPEN!!!! If you try and eat them chances are you will end up in hospital with seafood poisoning. That will really ruin the vibe.
A nice touch would be to add a splash of wine into the parcel before cooking but my hangover wouldn't allow me to smell wine, let alone eat or drink it.
Cheers,
Jamie Who
P.S. You can also serve this by carefully sliding the pasta into a deep bowl once cooked. It's not as dramatic but it does look a bit more elegant.
Posted by jamie who

Stunning recipe. I like that I can don my boots and scrape them off the rocks haha!! NOT!! Thank goodness for those green lips at Woolies :o)

That plate of food, dear Jamie is a thing of beauty!! Absolutely scrumptious...

Holy smokes, I have got to try this, or at least print the picture!

BG and Nina, thanks so much. Glad you like it. Clay, it really is pretty easy to do. It looks super-impressive and people will give you muchos respect