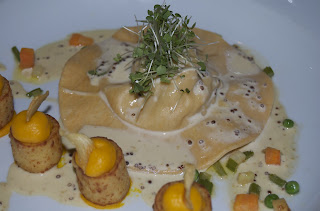 The amazing thing about this place is the way it seems to have been flying under the radar lately. With Eat Out Top 10 appearances in 2005 and 2007, Ginja has since gone very quiet. On Saturday night I went to see why.
Firstly, entering the place is pretty cool. There is something that adds to the expectation of the meal when you have to squeeze into a hole in the wall and slide down a tight alley to get into the front door. There is no over-the-top signage, or bright lights. In fact, the whole thing is quite understated. This is not the case with the menu, as dishes jump off the page with some of the boldest flavour combinations I have ever seen. Maybe it is just the way the dishes are listed on the menu (each dish is basically a long list of ingredients and cooking techniques with no punctuation or real description) but you definitely get the feeling that boundaries are being pushed here. And hard.
I won't take you through everything but the pick of the table's starters was a gorgonzola and pear risotto. For mains, I was stoked to see rabbit. I absolutely love it and you can't seem to find it anywhere lately. Here, it was served as a ravioli with butternut gnocchi and a mustard sauce and was brilliant. It was clean, light and fresh. I have only ever had it as a hearty ragout so this was an amazing change-up. Another showstopper was the rump steak dusted in ground porcini mushrooms. The chef came to the table to explain the new cooking technique he was trying out. He cooks the meat at a very low temperature for several hours. This isn't what you would normally assocaite with rump steak but the end result was awesome. Desserts were a mixed bag. After seeing a white-and-dark-chocolate brownie on the menu there was a moment's panic when I thought a fight was going to break out between us and the table next-door as we both asked the waitor to keep the last one for us. Kindly, the other couple said we could have it which to be honest I wish they hadn't. A tiny portion was plated alongside some hideous ice-cream. It was rock-hard and tasted like feet. Luckily for me my dessert was a triumph. A deconstructed apple pie with beautifully balanced flavours and presentation that showed equal amounts of playfullness and talent. One of the better desserts I have had.
All in all I find it difficult to pass a final judgement on Ginja. There are some touches of pure genius (beetroot and basil bread when you arrive), but also some really disappointing aspects (like the wine list. R225 for Beyerskloof Pinotage?!! And that's the cheapest bottle of red wine on the menu.) Maybe its just the standard of the competition, but after visiting I'm not surprised that they have slipped out of the Top 10. You almost get the feeling they are trying too hard. That said, the menu is too exciting and too unusual for me not to go back. Let's hope they can regain past glory.
Cheers,
Jamie Who
Posted by jamie who