Cafe Chic - Lots and lots of work to do 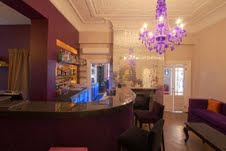 I went for drinks at The Roundhouse on Friday afternoon and bumped into a friend who works for Eat Out magazine. She asked where I was going for dinner and when I told her Cafe Chic she said, without hesitating for a second, "Oooooh, I've heard only bad things." Seriously. I tried to explain to her that she could have at least sugar-coated it for me a little bit but she was pretty relentless. She was even a little bit smug about the fact that she was off to The Bombay Bicycle Club. It seemed we had entered into some kind of "dinner-off" and I told her I was confident my meal would be better. Well...I was wrong. Cafe Chic was a massive let down. I must concede defeat on this one.
The dinner started off well-enough. We arrived at a beautiful venue and were given a quick tour of the place, which consists of a few houses that have been bought, re-zoned and converted into several rooms offering different things. There's a formal dining room with beautiful pressed ceilings and wooden flooring, a whiskey bar, a breakfast or "sun lounge" and a Moroccan tented area where tapas are served. We had a few drinks in the bar before we took our seats at our table and as I paged through the bar list I began to get more and more anxious. You see...a lot of thought has gone into that menu. Like...A LOT of thought. Too much perhaps. There are loads of different cocktails, divided into normal booze and premium brand categories, there are several different variations of whiskey, from Scottish to Irish to American. There's bourbon. There's vodka in several flavours and prices. And then there's the bubbly and wine which boasts the most expensive and luxurious brands around. So..basically the more I read the more I began to worry that Cafe Chic is a bar and not a restaurant. A hunch that would later prove to be absolutely spot-on.
Anyway, after drinks we took our seat at our table. Long-Distance and Mouse had joined us and our table of four doubled the amount of people in the room. Seriously, there were 8 people having dinner. Not a good sign. To start I had a prawn ravioli which had fresh, plump prawns cooked well but unfortunately in a casing of stodgy, heavy pasta. Others ordered a ceviche which was ok but strangely complicated with unnecessary ingredients like almonds. A ceviche - to me - should be a celebration of the fish, but in this case it was overshadowed with other flavours. The last starter was a salmon and potato dish which was decent enough but a bit bland.
For mains, I had a ribeye steak. When it was placed in front of me I saw a grey piece of meat the size and thickness of my palm. You might be surprised by what happened next. I tasted it and it tasted shit. Seriously, it was awful. Overcooked and under-seasoned. The other mains were a rack of lamb on butternut, pork-belly and monkfish (which I was excited to see) and were also distinctly unimpressive.
Cafe Chic prides itself on their Patisserie section which is a selection of freshly baked pastries and sweets so I was hoping dessert could salvage something from the night. I was badly wrong again. Mouse and I had their "selection of pastries" which allows you to choose three bite-sized pastries from their selection. These were probably the best part of the meal - the pecan nut pie was good and the chocolate torte was rich and decadent. The Queen's dessert was, unfortunately, laughable. She ordered a rum baba. A rum baba is a traditional small spongy cake that is soaked in rum. Sometimes there will be a syrup made from rum, sugar and water. The cake is often filled with cream. So...it sounds pretty delicious right? Well, what she got was a piece of sponge with a blob of cream on it swimming in a little pool of rum. I'm not sure what they were thinking. Maybe Jack Sparrow could've eaten it but nobody at our table could even stomach a bite. There was enough rum on the plate to get the entire restaurant hammered.
Our waiter was a bit of a shining light and his knowledge of wines was phenomenal. In Cafe Chic's defense he did explain to us that the new chef had started on Monday and was busy "re-working" the menu. I'm not sure that was the problem though. I think Cafe Chic needs to decide what it wants to be. At the moment all they want to be is posh (as highlighted by the R10 000 cocktail which includes Moet, Hennesey and a diamond bracelet).
You might not think it from this review but Cafe Chic has lots of potential. They just need to spend a bit more time sourcing ingredients that are seasonal and designing a menu that is less pretentious. If they can find a balance between bar and restaurant they will be ok. If not, this place will become somewhere to go for drinks. Not for food.
Cheers,
Jamie Who
Posted by jamie who

I've been to Cafe Chic a couple of times and have always had an amazing experience. The foods fantastic, the bars amazing and the ambience is something extraordinary! I've been to their Flower Power party and invited several friends to many a night of fabulous cocktails at their Moroccan tent.

What a great resource!

Anon, I'm glad you had a good time. It's never my aim to just knock a restaurant. I agree that the decor is beautiful and that the bar is killer but I cannot agree with you and the "fantastic" food. Let's hope more people experience what you did though.

It is definitely worth checking out their breakfast.
The Croque-Monsieur is very very good. And they do know how to poach a egg, a rare find.
Unfortunately I find their Cappachino's undrinkable.