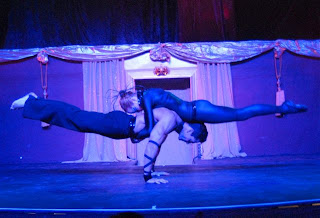 I've got a feeling Vaudeville is going to make lots of cash. Which is a good thing considering how much they must've spent on drugs when conceptualising the place. Honestly, it's pretty crazy. The first thing I saw when I arrived on Friday night to celebrate Squeeze's birthday with her and Hotspur was a French poodle the size of a baby giraffe. It was wearing a nappie. So now you're starting to get the picture?
The vibe here is that you pay R350 and get a three course dinner plus a show. And what a show. I can't remember everything perfectly (probably owing to their "house speciality shooter" which is cinnamon and orange infused tequila) but I do recall a woman with six boobs, two juggling midgets, a group of singing and dancing girls in black catsuits, a chick with a flaming hula-hoop, a Romanian bodybuilder, a couple of B-Boys, an eccentric English dude who climbed curtains and a penguin who was the but of all the jokes. I also had some major issues with the face that was being projected onto a giant white balloon behind me. To be honest it scared the pants off me. It should probably be mentioned that by now I was dressed like Che Guevara. What, you find that strange? Well, that's just how it works in there. You see, there's a stand where you go and buy various hats/wigs/feathers/eye-patches etc. to kind-of get in the swing of things. It really is an incredible thing to see so many people checking their inhibitions at the door and just enjoying a bit of escapism.
The food is provided by DISH catering. Starters were various salads and dips, mains were a choice of either salmon ravioli, beef short-rib or a vegetarian tart. A chocolate torte rounded it off. The starters were really good and so was the beef but The Queen's salmon was disappointingly bland and had far too much dill in it. In the name of journalism I ordered the vegetarian tart which was a good combination of gorgonzola and caramelised onion. It was well-seasoned with a good pastry. The dessert was actually seriously good and the mascarpone ice-cream deserves a mention. But let's be honest, when you've got rich velvet everywhere, a variety of crazy costumes at every table, fake clouds dotted around the room and waitresses wearing red corsets the food isn't really the centre of attention.
We went to The Fez afterwards (entrance is included in the R350) to spank a plank but ended up laughing at the...how do I say this nicely...older generation who had clearly been planning their big night out for some time. It was pretty cool seeing them let their hair down and my word they didn't disappoint. It was priceless.
This thing is one of those events you have to go to. It is a surreal, weird, cool sensory overload and you can't help but enjoy yourself.  Stepping into that place really is like enjoying a few hours in some kind of trippy fantasy world. Apparently you need to book quite a long way in advance so give them a call on 086 178 7797.
Cheers,
Jamie Who
Posted by jamie who

SUBLIMEEEE...You had it down to a T! ridiculously insane, silly, a little pricey! One of the best nights I've had for a long time!