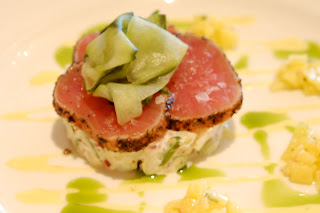 Saturday saw The Queen and I heading through to Franschhoek for The Gym Nazi and The Pilates Pirate's wedding. With the ceremony starting at 5 we decided to cruise through early and have lunch at one of the many amazing restaurants out there. In the car we settled on Reuben's. The brilliant Richard Carstens has joined Reuben (I think on a consultancy basis) and I was keen to see what he has been able to add. Look, we were pretty arrogant thinking we could just arrive and get a table. When we arrived and asked for a table for two the chick did her best not to laugh in our faces and to her credit politely told us the place was full. It was. As a matter of fact it was absolutely humming. Not to be defeated, I suggested taking a flier at Le Quartier Francais, headed up one of my favourite South African chefs, Margot Janse. I thought we had even less of a chance to get in there but surprisingly we got lucky and were seated at iCi (iCi is LQF's daytime restaurant, not to be confused with the more formal Tasting Room which is open for dinners).
The vibe at iCi is a chilled one but you know you are dealing with quality from the second you walk in the place. Service is polished and the menu itself had several items jumping out at me straight away. I guess I would call it bistro-styled food but with South African ingredients. There are "The nibbles" consisting of things like oysters, ham croquettes, marinated olives and a charcuterie board with baby beetroot. (The meat for the charcuterie comes from sister restaurant Bread & Wine which is on Moreson wine estate. That itself is well worth a visit.) Starters range from chilled sweetcorn soup to mussels with a curry and orange sauce. The mains had courses like wood roasted crayfish, springbok shank lasagne and grilled ribeye sitting proudly alongside spaghetti and lamb meatballs. Something that really tickled me was the wood roasted free range chicken for two with roasted potatoes and salad. (How cool is that? Come on, you know you dig it). A table next to us ordered it and it looked sensational. It even came with a little gravy boat...what's that saying about simple things amusing simple minds?
Anyway, to eat I had a rabbit and tarragon terrine with an apricot relish (R55). You might know from past postings that I absolutely love rabbit. I had never had it in a pressed terrine before and the combination with the tarragon worked beautifully. For mains The Queen went for a peppered seared tuna with a cold potato salad and cucumber(R60). The potatoes had a hint of lime running through them which lifted the dish and added a phenomenal dimension - light, elegant and summery. Superb. I had a yellowtail which was served on a brandade and braised baby fennel(R125). Brandade is a puree of white fish, olive oil and milk - it is unusual to see (in fact I can't remember seeing it before) but bloody hell it was good. The fish was topped with a salsa verde. Now, I'm going to make a big call here. That dish was the most memorable fish dish I have had for years. The flavours were gutsy and bold and might have been a bit overpowering for some but for me they were unreal. Wow.
It's also worth mentioning that iCi has an impressive wine list showcasing local wineries. We had a few gasses of Moreson's Miss Molly Chenin Blanc which I had never tried. That too was fantastic.
All in all, I was really, really impressed. I know LQF gets a lot of attention for The Tasting Room and having been there before I can vouch that it is all well deserved but what I can add is that iCi deserves a lot more hype. It's 45 minutes from Cape Town and well worth the drive. Trust me.
Cheers,
Jamie Who
Posted by jamie who