Overture - Straight out of the top drawer 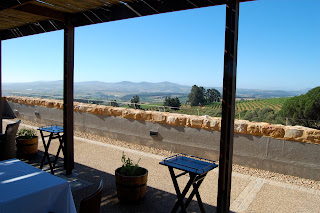 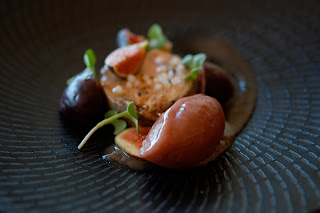 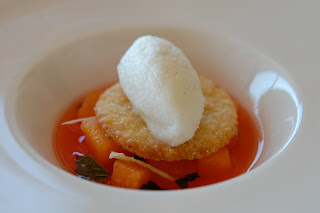 On Saturday I was lucky enough to join Bertus Basson, of Overture fame, for lunch. Now look, I have been quite outspoken in the past about the fact that I don't do comped meals for the simple reason that I want to maintain credibility but this was different. If a chef calls me up and has the decency to put aside some time to talk about food philosophies and plans for the future of course I will listen. And let's be honest...it's Overture people. Come now. I still turn down invitations by restaurateurs, brand managers and PR companies offering free meals in exchange for good reviews but here was an opportunity to conduct an informal interview with someone I admire and respect while at the same time enjoying some of the best food in the country. The moral debate was an extremely short one.
The first thing I noticed about Bertus (other than the fairly hectic mohawk) was the obvious love for food. When someone talks that passionately about something you listen and what followed for the next three hours was nothing short of fascinating. I didn't have a pen and paper (that's not the vibe I like to kick out on a Saturday) but let me try summarise what came out of our chat:
Bertus changes his menu the morning of service, according to what arrives at his door. He spends a lot of his time driving around with his wine guy (affectionately referred to as Stretch throughout lunch) tasting wines and figuring out how he can work them into his menu design. He loves Cape Town and believes food will always taste better in areas "where there are vineyards and an ocean." He has a huge amount of respect for other South African chefs and admits that they draw inspiration from each other. He is hugely ambitious and was gutted to finish in 10th place at the Eat Out Awards Dinner (a position most would celebrate). He believes taste is paramount to creating a good dish, "what's the point if something looks pretty but tastes shit?" He loves old-school cooking techniques like braising. He puts a huge emphasis on sourcing ingredients to the point that he actually got excited talking about a particular supplier of shallots. He loves fish, specifically the less common species and thinks it is important for people to be more aware of the green/orange/red grading system. He's not just bound to the restaurant and in fact has a catering company and several other exciting projects (secret unfortunately) in the pipeline. He says there is a time and a place for fancy food and simple food and people need to know that. "I actually dig the Spur hey...". He spends time deliberately breaking down new recruits at the restaurant to see if they have what it takes but has only ever met one member of staff who was untrainable. "I like getting these guys in from the catering schools who think they're hot stuff and making them peel potatoes. That tests them and makes them understand the hierarchy here."
Look there's a lot more that was said but we did have quite a bit to drink and besides I really should be talking about the venue and the food...
The restaurant itself is on Hidden Valley Wine Estate and is perched high up on a hill looking back over a beautiful valley towards Cape Town. The interior is modern - a combination of earthy stone and wood mixed in with a lot of glass. (Understandable given the ridiculous views.)
As mentioned, the menu changes daily but will always consist of 10 options for guests to choose from. The dishes range from light starters to heavier options and you have the choice of 3, 4, or 5 course options priced at R250, R300 and R360 respectively. How you put your meal together (in what order I mean) is up to you. With wine pairings the meal jumps out to R300, R380 and R460. An 8-course tasting menu is available for R455 (R755 with wine).
I was lucky enough to enjoy 8 courses. I could honestly go on for pages and pages about them but I don't want to get into the technicalities of each dish. You'll see by the style of food the level of cooking that is on offer but when I say each dish was at least 8/10 (Most were 9, some were 10) you should understand I don't really need to wank on and on about them. Let's break it down for you:
And then the wine. Bloody hell, the wine. What a joke how unbelievable the wine was. We had (in order, matched to the courses) a 2009 Hidden Valley Sauvignon Blanc, a Pierre Jordan Ratfia (Google Ratfia - it's quite interesting), a 2009 Land's end Sauvignon Blanc, the 2006 Hidden Valley red blend (sorry, not too sure about this one but I think it was mainly Cab Sav with a bit of Malbec?), a 2009 Jordan Unoaked Chardonnay, a 2009 Paul Cluver Gewurztraminer, a 2009 Bon Courage Red Muscadel.
Sho, that's quite a bit of reading to get through. It certainly was not a mission to eat our way through it and we had an awesome time and some good laughs. During the lunch no less than three guests came over to thank him personally with comments like "That was the best lunch I've had" and "Congrats on having the best restaurant in the country." Pretty high praise that was not lost on Bertus who explained that that is what makes all the hard work worthwhile. When walking us out he casually pointed to the beautiful pond at the entrance and explained the plan to introduce trout and tilapia. That's a pretty awesome vibe. Just like everything else at Overture.
You can give them a call on (021) 880-2721. They are open for lunch from Tuesday through to Sunday and do dinners on Thursdays and Fridays.
Cheers,
Jamie Who
Posted by jamie who