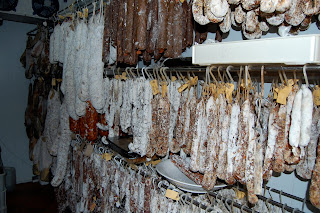 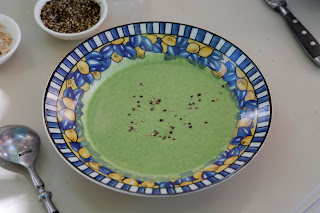 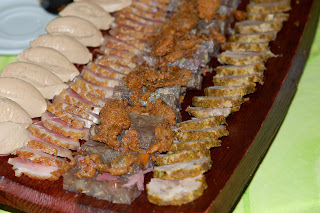 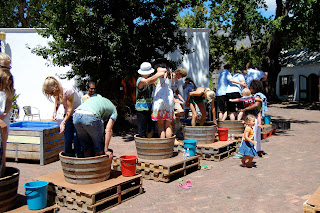 Bread & Wine restaurant on Moreson Wine Estate is a little misleading as a name. Because (as I was forced to do as a result of AlcoFreeFeb) if you take wine out of the equation there is a whole lot more than just bread on offer. Let me explain...
On Saturday I found myself at The Blessing of The Harvest Festival at Moreson. Basically, the whole day is centered around good food and wine and besides making our own, people were drinking quite a bit of the stuff. I was sitting at a table with Clayton, their winemaker, and he was chatting about the wines on offer and their plans for the future. It was a beautiful day and the script was written to get stuck into some quality wine. Knowing I wasn't allowed to booze I was holding firmly onto the fact that I knew the food would be good. I was not disappointed.
They set up one of the most impressive buffets I have ever seen. I asked for a menu so I could tell you everything we were served but I proceeded to lose that somewhere between Franschhoek and Cape Town so you'll just have to take my word for it! The style of food was a great reflection of what they serve at Bread & Wine though: chilled spinach and ricotta soup, chickpea and roasted pepper salad, rare roast beef, smoked ham, corn tart with pancetta, watermelon, feta and pumpkin seed salad etc. The highlight had to be the duck board with four different versions of the animal.
Neil Jewell is a known genius when it comes to meat (his charcuterie board is legendary) and he took me into their coldroom to show me dozens of salamis, hams, chorizos and more. He got SO excited talking about meat and the experiments he is busy working on (including a Guinness sausage!) The passion and pride he has for his craft was inspirational to see, and was also infectious. I never expected to get sucked into his weird world of meats but there I was rubbing a paprika chorizo like it was a labrador puppy. I felt a bit embarrassed when I eventually snapped out of my trance and headed back to civilisation.
On a day-to-day-basis the restaurant offers gourmet food but served in a rustic setting. The standard of produce is uncompromising and the menu is innovative. If I had to have one criticism (and it's not their fault) I would say the venue lends itself too much to summer (their tables are mostly outside in a beautiful courtyard.) An idea would be to do a bit more to improve the vibe inside which is insipid and a bit dull.
Tina Jewell is responsible for putting the "Bread" into Bread & Wine and her ridiculously good freshly baked varieties are some of the best I've had. Ever. I have been on a bread-making course she runs and if ever you feel like something a bit different you should check it out.
There are dozens of phenomenal places to eat in the winelands but if you feel like a chilled glass of quality wine (Clayton won young winemaker of the year for his Premium Chardonnay so that's the one you want) and a relaxed lunch this is your spot. Just pick a good day.
Call them on (021) 876-3692
Cheers,
Jamie Who
Posted by jamie who

ahh but did HE really make that chardonnay? hmm