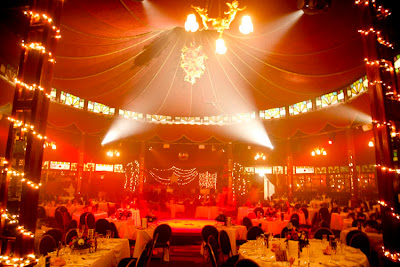 The Madame Zingara  story is a beaut. It's like a soap opera. In a nutshell, it goes like this:
1. One of Cape Town's most beloved restaurants burns down
2. In one of the greatest marketing/PR coups South Africa has ever seen, the restaurant is resurrected. This time in a massive tent. With live shows.
3. The wildly successful show comes to an end. It gets packed up and the team departs on an overseas tour.
4. A major investor pulls out.
5. The team returns to South Africa, battered and in dire financial trouble.
Last night I was lucky enough to be part of what would read as point 6 in the above story. Point 6 would say: The restaurant opens again. Like a phoenix rising from the ashes! Bigger and better than ever, and this time in the middle of a designer shanty-town.
The team has done a phenomenal job in creating a faux-township, dubbed eZingalethu. There's a shebeen, a pool bar, some dodgy tattoo shop (they're fake, don't worry), hubcaps on corragated iron partitions, plastic chairs everywhere, a place to hire gumboots and more. The staff are dressed in the trademark whacky costumes and there are several familiar faces from the past MZ adventures. There are some new characters too - my favourite being "the tart". A dude (quite a big dude) who is dressed as a brilliant parody of the Paris-Hilton/Joburg kugel type of girl. She (he) dons a tiny dress and a 1m tall wine glass. She (he) flits around chatting to anyone who will listen and is brilliant. A similar satirical character is "the Trance-party chick", which is another dude dressed as a hippy at a trance party. She (he) has ribbons everywhere, a florescent headband and a moonbag from the 80's. It's classic. She (he) also does a good job of acting like the shrooms have kicked in too hard. Come to think of it, most of the MZ staff do a good job of acting like the drugs have kicked in....
Anyway, once inside the tent you are reminded of how much you missed it. The vibe is electric, the costumes outrageous and the tent itself beautiful. I took my seat and for the next few hours was treated to some awesome cirque acts. A combination of physical strength and raw power, beauty, humour, talent and style were seamlessly strung together. It was awesome to watch and I enjoyed it way more than Vaudeville. Some might disagree but at Vaudeville I found myself drinking tequila to try get in the mood. Last night I had to stop myself from getting tequila. I didn't need it.  The show has something for everyone but the stand-outs for me were the hula-hoop girl and the roller-skate pair. Truly skoochie.
Another major aspect of MZ is their community work. They have one again teamed up with Ikamva Labantu, a non-profit organisation who help support communities with health, education, food, security and skill development initiatives. Awesome stuff.
Oh, the food. Right, I forgot about the food. An antipasti platter is shared between two people. Not bad. Mozzarella, fresh figs, a sundried tomato tart, a simple salad and some toasted cashews. The starter dish was a artichoke ravioli and for mains you could choose from their signature fillet with chocolate and chilli sauce, a springbok shank, salmon or a vegetarian risotto with roasted butternut and gorgonzola. Dessert was a chocolate torte with a raspberry mousse. Was the food spectacular? No. But it was decent. And let's appreciate that they are feeding 5oo people! That alone is pretty spectacular and gets my respect. And let's be honest, you're not there for the food really. You're there for a night of escapism and to have a good time, which I absolutely did.
So there it is. Madame Zingara is back. And she's beautiful.
Cheers,
Jamie Who
P.S. How much are tickets and how do you get them? Well, I was lucky enough to be invited as media so I didn't pay anything. Well...I paid for the wine (the winelist is impressive by the way). For info on prices etc. check out their website on www.madamezingara.com
Posted by jamie who

Awesome review Jamie - can't wait to visit again. Have been hearing many stories about this roller skating duo!

By the way - when is Caveau having another party? The last birthday party at The Mill was soooo good!!(if memory serves me correctly - there was lots of wine involved)

Thanks for that review Jamie - and so early in the day - you did well to stay away from the tequilla. i won tickets and am now even more soupa amped to go!

OOooh I so want to go!! Been meaning to go ever since I heard about it, but shortly after they closed (boo for me). So glad they're back up & running. It sounds like an unforgettable experience.

...readers of your blogs deserve full objectivity which is not achievable when its a freebie, been having too many beers with Dax at Union and its rubbing off on you andy;)

I also rate Madame Z above a recent visit to Vaudeville. Madame's was just magical when I went last and I am sure the new season won't disappoint.

It's not just the awesome marketing job they do, it's the whole vibe, from the tent to props, the table staff, the cameo characters, the attention to detail.

Daz, I read your comment and responded under my post about Jamie Who favourites. I think it was more relevant to that piece?

Bubbles, it was a responsible decision indeed! Maybe you'll go the other way.

Marisa, you should book asap - I think it will be sold out quite a long way in advance

Kate, the Caveau parties are the stuff of legends.
The normally throw a birthday party but last year's was extra large as it coincided with their 5 year anniversary. (And yes, there was plenty of wine involved)

Alison, the cameo roles are priceless this year. You should check them out.