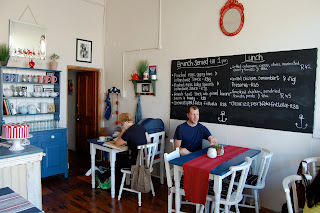 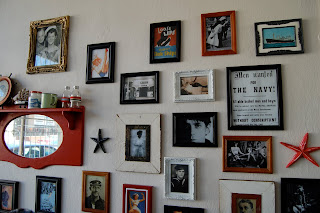 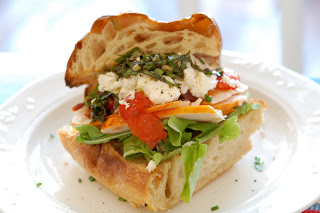 I love getting a heads-up from a reader when a new spot opens up. To me, that's what makes blogs blogs. The interaction. And with the rise of social media it means you can get this kind of feedback pretty much instantly. Like...someone goes for lunch, someone digs lunch, someone tells you about their lunch. It's cool.
This is exactly how I found out about a gem in Observatory called Hello Sailor. Cut from the same cloth as The Kitchen, Superette and Cheyne's, it is obvious that the owners subscribe to the idea that design and food are interlinked. I say this because the place is flat-out cool. Look, it's not in the best area (it's in quite a shitty area actually) but the decor is awesome. Little trinkets, posters and sailing memorabilia have been collected to form a colour scheme of red, blue and white which acts as the backbone of the place. The room is tiny (I reckon it can seat 20 people) and the menu just as small. Breakfast is the usual stuff with nice additions like a pea and chorizo frittata. Lunch is a collection of sandwiches with interesting fillings and flavour combinations. I went with smoked chicken, sundried tomatoes, pesto and feta while The Queen chose grilled chicken, preserved figs and camembert. I was a bit disappointed at the fact that I could only have ciabatta but the flavours were good, even if the bread was average.
A drawcard is the fact that they sell Deluxe Coffeeworks, which I'm told by those in the know challenges for the best coffee in town. The guy who served us also explained that they are also open to chat about private dinners which would be a very cool and unique venue. Something to consider for sure.
They're in Lower Main Road but I couldn't find an address or phone number. Check them out on www.hellosailorbistro.co.za
Cheers,
Jamie Who
Posted by jamie who

the link to hello sailor bistro website doesnt work from your link.
it is the correct site,but nothin from here....thanx
www.hellosailorbistro.co.za
http://www.facebook.com/?ref=logo#!/group.php?gid=446589210360&ref=ts