Maze at The One & Only - I'm underwhelmed 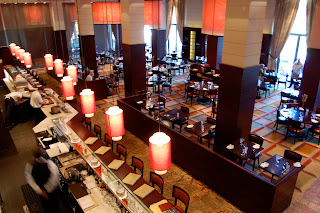 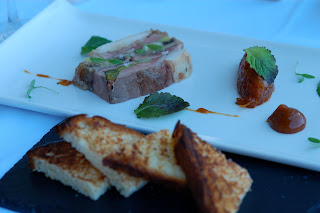 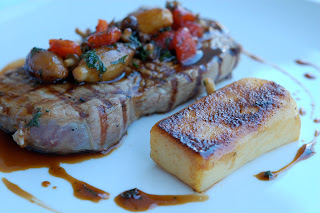 The problem with putting a restaurant in the lobby of a hotel...is that it often feels like a restaurant in the lobby of a hotel. And Maze, at The One & Only, is a good example of that. Dark wood, thick carpets with geometric prints and heavy, oversized light-fixtures make it seem impersonal rather than impressive. Of course, the space is made to seem all the more soulless when there are hardly any people there and, after accepting an invitation by management to have lunch there yesterday, the first thing that struck me was how dead the place was. In their defense, they have obviously realised the need to get some local lunchtime trade coming through the doors and have introduced a set lunch menu. At R150 for two courses and R200 for three courses it is extremely good value when compared to (a) The rest of their menu, and (b) Some of the V&A Waterfront restaurant prices.
The new lunch menu is set to change weekly. Yesterday there were three options as starters, three main dishes and three desserts. After checking with the chef that his meat was strictly free-range, I began with a duck and chicken terrine served with peach chutney. Feeling the long weekend a touch prematurely I also ordered a bottle of Bouchard Finlayson Sans Barrique Chardonnay (What, like you wouldn't have? Grow up.) The Queen ordered quail. I was very impressed with my dish. Beautifully presented, with the subtle chicken and the slightly weightier duck working nicely together. The chutney was a win too and was served as a chunky "Mrs. Balls" style along with a much more elegant puree version. They also brought out some toasted brioche - a nice touch. The Quail was good but nothing special. For mains The Queen ordered kingklip with bourgignon sauce. I was intrigued as I have never seen the sauce served with fish before. The combination didn't work for me - the delicate flavour of fish being totally overpowered. My ribeye was a trainwreck. The first few bites were good enough and the sauce was exceptional. (They had smoked tomatoes and combined them with baby mushrooms and a deliciously silky jus.) After a few mouthfuls I started to panic though. I simply could not chew meat that tough. I tried. And tried. And chewed. And chewed. And chewed. Eventually I just left some of the steak on the plate. Desserts were a lemon meringue cheesecake, which went a little way towards compensating for the steak, and a rooibos panna cotta which was equally good. In an effort to right the earlier mistake we were both given a free glass of Rudera Noble Late Harvest to enjoy with the dessert. I must say, I always enjoy managers admitting they have done something wrong and trying to make amends. Too many are far too arrogant and would rather sulk or make the customer feel like they are actually the one who has done wrong.
Mention must be made of the awesome service. The waiter and sommelier were friendly and extremely knowledgeable. I loved the layout of the winelist too, which is split into regions rather than grape varieties. An impressive selection of wines by the glass too.
All in all, I would say the place is underperforming. There is inconsistency and a lack of atmosphere that borders on depressing. But there is definitely potential. Chatting to the manager, he told us the aim is to make Maze less intimidating for Capetonians. They want to get people coming for relaxing after-work drinks, business lunches or just a glass of wine. The problem is...in Cape Town we already have so many other places to do this. So there is a lot of work to do. But they know that. And that, at least, is a good sign.
Cheers,
Jamie Who
Posted by jamie who

I was also very underwhelmed by my experience there, Jamie Who. It was closer to when it first opened though so assumed their flaws were all related to that. Obviously not.

Whenever I think of Maze, I naturally think of Gordon Ramsay, which then makes me think of this Matthew Herbert track: http://www.youtube.com/watch?v=zKGC8HpX1xI

Have a super long weekend and happy Easter to you! Perhaps you can advise on where the best Easter eggs can be found :)

Ditto. Underwhelmed.
And the decor was, dare I say it, Holiday-Inn-esque.
Ag shame Gordon.