Jardine Bakery - Sushi on rye. I like the sound of that. 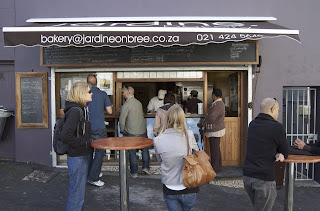 For those of you who haven't heard of George Jardine, umm...shame. How are you doing? Who tied your shoelaces for you this morning? His restaurant has been number two in Eat Out Magazine's top 10 for the last two years and he was awarded Chef of the year at the 2007 awards. So, the man can cook.
His restaurant is at 185 Bree Street and is phenomenal, but that deserves a separate review. For now, I'm here to tell you about his bakery which is situated downstairs from the main restaurant. It has been open for roughly a year now and the place heaves. Taking the "hole-in-the-wall" concept to a new level, the vibe here is basically a countertop facing the pavement. Here, they have taken baking and made it funky, as can be seen from the stylised branding and tattoos sticking out from the chef's uniform of the dude serving you. There are a couple of tables and benches where you can enjoy your lunch, otherwise you get it on the run.
For breakfast there is homemade muesli and croissants and for lunch there are pies, gourmet sandwiches and soups of the day. It's not rocket science but everything they do has quality written all over it. I have been there twice in the past week and have tried the Italian (parma ham, mozzarella, tomatoes and basil) and the Sushi (salmon, pickled ginger, wasabi mayo and cos lettuce). Both were on their 66% sourdough/rye bread and both were beautiful. At R40 each, considering the ingredients, I reckon it's more than worth it.
I see they are open now on Saturdays too so for those of you who blame work for your reason not to have visited, you now have no excuse.  It's a good one peeps. Do it.
Jardine Bakery is on the corner of Bree and Bloem. Call them on (021) 424-5644.
Cheers,
Jamie Who
Posted by jamie who