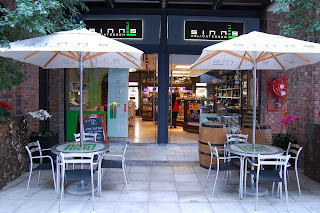 Remember S-Bar in Wembley Square? Remember a few years ago when the whole of Cape Town used to head there for after work drinks? Fridays were PACKED. You struggled to find parking. That was years ago though. As is always the case in this city, something new popped up and people moved on. I moved on. I figured Wembley Square would fade and tenants would be replaced. It seems the joke was on me.
I was astonished on a recent trip to Wembley Square to find that not only are the restaurants doing ok, but in fact they are absolutely humming. Knead? Packed. Crush? Packed. Vida? Well, obviously that was packed. But what was most interesting was the expansion of the Sinn's brand within Wembley. As well as S-Bar and Sinn's restaurant, Thomas Sinn (the owner) has opened one of his Sinnfull ice-cream shops - albeit a small, portable version - and a brand new deli.
The deli is what interested me. With so many of these kinds of places opening up, I wanted to know what made this one different. And the truth is...not much. There are cold meats, cheeses and pre-cooked meals. There are chocolates, sweets, wraps, sandwiches and much more. Pretty standard stuff. The quality is high though, and the space is sexy. Most impressive though, is their wine selection. It shows a nice range and plenty of variety for such a small shop.
It is interesting. Obviously Thomas has confidence in the deli. He now has control over literally half of Wembley Square and he wouldn't keep expanding if he did not feel there was a demand. Perhaps his deli is a goldmine for those working in the area. Time will tell...
Get hold of them on (021) 465-0967
Cheers,
Jamie Who
Posted by jamie who