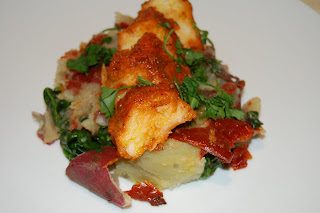 Another Monday and the work (my other work) seems to have somehow made love to itself, reproduced and tripled in amount. Not ideal. So, a bit pushed for time here. Not to worry though. Last week I also ran out of time and managed to bang out a nice little dish for Pafoof who was down from Jozi. I mixed up a little bit of Asia with flavours of the Med with nice results. It was delicious (obviously, come now) but it was super-healthy too. Give it a stab next time you need something quick.
Okay, stuff you'll need to feed 4:
Okay, what to do:
1. Preheat your oven to 200 degrees celsius. In a wide, shallow dish pour in some olive oil and sprinkle in the five-spice and paprika. Roll the fish in the spices so that the fillets are all evenly covered.
2. Boil the potatoes in salted boiling water until they are soft. Remove from heat and squash them with a fork. Do not mash. Add the olives, the sundried tomatoes and some olive oil to loosen everything up.
3. Panfry the spinach until it is wilted but still has some colour. Add to the potatoes and stir everything to combine.
4. Meanwhile, cook the fish for about 12 - 15 minutes or until done. Do not overcook the fish!
5. To serve, spoon the crushed potatoes onto the middle of a large plate. Slice the fish diagonally and place on top of the potatoes. Drizzle over some lemon juice and sprinkle some parsley on top.
Another cracker that isn't difficult at all. The five-spice is a bit exotic but it is worth getting. It is a brilliant combination of the sweet, sour, hot and salty flavours that are the cornerstones of Asian cooking. Get some and start experimenting - you can use it in stir-fries, soups, marinades, curries and more. It's pretty potent stuff with lots of strong flavours though so don't be a cowboy with it...a little goes a long way.
Cheers,
Jamie Who
Posted by jamie who

I felt so good 'n healthy after this tasty meal, I even allowed myself to indulge in a TimTam.
Or two.

Thanks again Jamie Who, you rock.