Sidedish - Okay, I see what you did there... 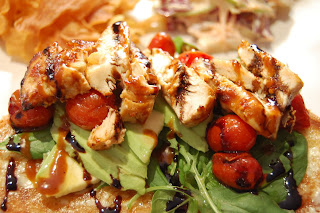 There are few things more “Cape Town” than Bo-Kaap. The "smartie-houses" and the general vibe up there is pretty special and it’s awesome to see developers pouring a bit of money into upgrading the area in the form of new buildings. There are new offices popping up, apartments are being built and a particularly funky boutique hotel called Rouge on Rose has opened its doors. Inside the hotel is a gem of a restaurant called Sidedish. Owned by the talented caterers who run Dish Catering (Get it? Dish...Sidedish...Got it? Good), the place is as intimate as you can get with only a handful of tables. The décor is comfortable and inviting, with the menu scribbled on columns. Adding to the feeling of being in someone’s home, rather than a restaurant, when I visited the waitress was also the chef!

The menu itself is simple, with things like awesome salads (The Princess had one with chicken, roasted butternut, beetroot, pumpkin seeds), pasta specials, a lamb burger and a creamy butter chicken curry. The baked goods look outrageously good too so if you want the time spent in the gym to pay off you’ll do well to stay away from them. Scones, cookies, fudge and more were all very tempting but I stayed strong. Instead, I went for the grilled chicken breast on toasted sourdough. It came on rocket leaves and avocado with a drizzle of balsamic reduction and was a hit. Pafoof had the soup of the day which was the - by now -pretty standard sweet-potato and butternut. A good hit of cumin at least made it good, if not unforgettable. The coffee was particularly good and if you give in and need a sweet fix the hot chocolate is the real deal. As in..the REAL deal. Hot milk with melted chocolate that you pour in yourself. Ya, I know.
A good place that is a nice change from the regular venues, I really enjoyed my lunch there. An extra waitor or waitress would be a good call but otherwise I left happy. Come to think of it, everyone in the place seemed pretty happy.
Find it at 25 Rose Street or get hold of them on (021) 426-0298.
Cheers,
Jamie Who
Posted by jamie who

Looks worth a visit. Are they open for dinner or is just a lunchtime spot?

At the moment I think they just do breakfasts and lunches. Maybe with time they will grow...