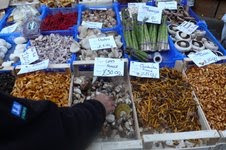 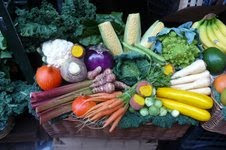 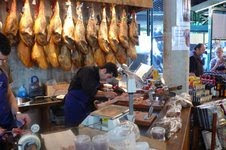 Another new addition to the Jamie Who blog today in the form of a new tag. This one is called "Readers' adventures and inspirations" and is basically a celebration of you guys. What I want is for you peeps to e-mail me any interesting stories/pictures/reviews etc. that you have experienced in the food scene. If they're any good I will turn them into stories and post them.
I got the idea reading a pretty hilarious e-mail that the brother of The Other Guy Who Can Cook sent me. It was recalling his time in the Borough Market in London. (Google it). Now, I don't know what to call him so let's go with The Other Guy Who Can Cook's Brother, but this dude is PASS-ION-ATE about food and cooks better than some qualified chefs I know. He spoke so enthusiastically about the produce on offer that I felt I had to show you some of the pictures he took (they're the ones above by the way genius). So anyway, he went on to explain the parma ham, mushrooms and assorted organic meats. He explained the marbling, the different cuts of meat and the fresh vegetables. He told a story of standing in a queue for 30 minutes to get a roll with only three ingredients: Chorizo, rocket and roasted peppers. But he understood that the quality of food was worth it.
Here is a guy who understands Jamie Who. Here is a guy who understands how you can fall in love with food. And you know what? I'm finding more and more people out there who are the same. Lately when I'm out at dinner parties or having a few drinks I'm amazed at how often the conversation comes back to food. It's awesome.
So with that in mind, let me officially invite you to send me your food stories (jamiewhoblog@gmail.com) Make them good, I'm not going to use them if they're shit. That's not how we roll at Jamie Who.
And...just like that we have quietly reviewed a market overseas. Yip, we have gone global.
Cheers,
Jamie Who
Posted by jamie who