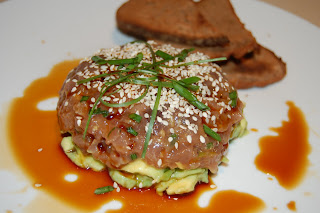 I have explained the taste:health ratio before but I'll do it once more. Most people think that to cook healthy food you need to do something boring and tasteless. The same people think the only way to cook something that tastes awesome is to use loads of oil/butter/fatty foods. So basically they're saying you have to choose taste OR health. I'm saying bullshit. I'm saying you can cook amazing food that scores well in terms of taste and health. One doesn't have to suffer. This recipe is a great example of what I'm talking about. Oh, did I mention it will be finished in less than 15 minutes. Yeah, that's pretty cool.
The list of ingredients below is pretty flexible. As with a lot of Asian cooking the amounts are up to the individual. The key is finding a balance between salty, sour, hot and sweet. Just taste as you go.
Stuff you'll need to feed 4:
Okay, what to do:
1. Cut your tuna into small cubes and place in a bowl. Combine with all the other ingredients except the lime/lemon juice,the sesame seeds and the avo. Season generously with cracked black pepper. (You won't need salt because of the fish sauce and the soy)
2. Cut your avo's in half, remove from their skins and cube them. Squeeze the lime/lemon juice over and place in a separate bowl.
3. Toast your bread. When done, place them on the counter and cut the four pieces in half lengthways (through the crust) to create 8 thin slices. Place under a hot grill for a few minutes until they crisp up. Watch them carefully, this won't take long at all.
4. Wet the insides of glass bowls or anything you can find. Spoon some tuna in and push down. Layer some avocado on top and gently press down until the bowls are full.
5. To serve, place a plate on the bowl and carefully flip it over. The tuna will slide out. Garnish with sesame seeds and chives that have been cut lengthways. Drizzle over some soy sauce to finish it off.
Hey? How good does that look? This one is a killer as a starter for dinner parties and your guests will have no idea just how easy it was. There are some things to remember though. Only use THE BEST quality ingredients you can find for this dish. I'm lucky because So-So hooked me up with a mate of his who has bought a boat and turned it into a tuna exporting business. The tuna was caught the same day I made this. Now...I'm not saying you should buy a boat but just make sure the fish is amazing. Anything less won't work.
Cheers,
Jamie Who
Posted by jamie who