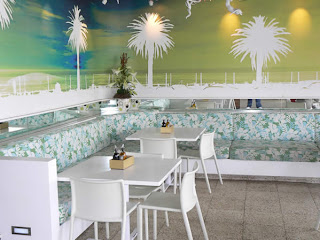 I was supposed to drive through to Stellenbosch on Sunday for brunch but through a complicated, strange twist of events (I decided not to) I ended up at Sandbar in Camps Bay. Pafoof and The Monkey Whisperer were down from Jozi and I wanted to show them the famous strip on what was supposed to be a beautiful morning. Now, I always feel a bit strange being in Camps Bay and not at Caprice. It's like cheating on your girlfriend. But...I was keen to try something different so we settled in at the perfect outside table.
The breakfast menu at Sandbar displays that little extra effort that I always look for. Sure, it's got the usual suspects but it also has things like ciabatta topped with spinach, feta, chilli and two poached eggs. It's got killer omelettes, a wide range of croissants, french toast and some healthier options like mixed nuts, yoghurt and berries. Having gone for a mountain run with The Gym Nazi - and with a day of work still ahead of me - I knew the healthy vibe was not really going to cut it. I had earned something a bit more spectacular. I had earned the bacon, brie and rocket omelette. Let me tell you, it was pretty awesome. Maybe the bacon could have been a bit crispier? The others had French toast (decent), and poached eggs on rye (not bad) but nothing really compared to my showstopper. Coffee was from Origin (spectacular) and the juice was freshly squeezed.
One thing I have to mention is the service. I have previously written about my experience at Roots and the way that the chef's apology and manner in which he handled a mistake was so refreshing (http://jamiewhatshisname.blogspot.com/2009/08/roots-tough-one-for-me.html)
Well, on Sunday we ordered and hadn't really even been waiting that long. Next thing, the owner comes over and apologises prefusely for the wait. She explained there had been a mix-up at the pass and our order had been delayed. We said it wasn't a problem but she insisted that all our drinks were comped. I was amazed. If only every restaurant had standards that high...
Sandbar offers salads, wraps and more substantial meals as the day unwinds. You could do worse than catching a light lunch, smoothie or a cocktail there in summer - fresh off the beach. Yes please. I dig the pavement seating too. Caprice will still dominate the strip this summer but for a change-up Sandbar is a good call.
Give them a call on (021) 438-8336 or check them out on www.sandbar.co.za
Cheers,
Jamie Who
Posted by jamie who