Superette - It's right up there 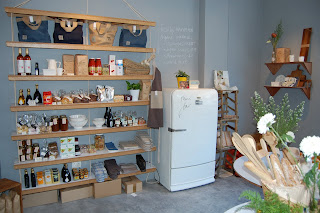 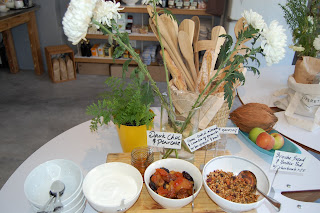 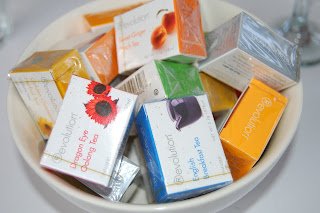 How do you define a hidden gem in terms of a restaurant? For me it's a place that exceeds all your expectations. It's a place that not a lot of people know about, and the people who do know about it are the type of people who will appreciate it. A hidden gem will always have quirky touches and will always place a big emphasis on the small details. Superette is the epitome of a hidden gem.
I hit it up last week for lunch with The Pick and Power. As I walked in I was impressed. The place oozes cool. Decor-wise it is a combination of understated minimalistic tables and chairs, and old-school "country kitchen". The main feature is a beautiful, vintage fridge and shelves lined with organic homemade produce. The owners are the team that brought the awesome whatiftheworld gallery to Woodtock so the art pieces on the walls are as funky as you would expect.
The menu is scribbled on some white tiles but focuses on gourmet sandwiches, seasonal salads, freshly baked goods, real fruit juice and artisan coffee. When we were there they even had oysters that had arrived a few hours before we had. I didn't hesitate to go for the seared tuna on toasted sourdough. The tuna was dressed with an Asian vinaigrette and was cooked perfectly. The bread was insane. The others both ordered a bratwurst/brockwurst (I'm not sure which to be honest. Let's just say it was a big fu*king sausage) and even that was presented beautifully with gherkins, pickled baby onions and real mustard. It looked phenomenal. When I had finished eating I asked Cameron if they served tea. I should've known better. He brought a bowl of individually-wrapped, flavoured teas to the table along with a retro teapot. Nice. I went for peach oolong by the way. Yip, that's how they roll at Superette.
I haven't enjoyed a restaurant this much in a while. It reminded me of Cheyne's in a way. Funky vibe, cool owners, beautiful food and a menu that is truly different and exciting. I have already been back and this time went for a steak tartare sandwich with rocket and capers. It was just as good as my first visit.
Highly, highly recommended peeps. You can find them at 218 Albert Road or call them on (021) 802-5525.
Cheers,
Jamie Who
Posted by jamie who

Sounds like a great find. Will be sure to visit soon.