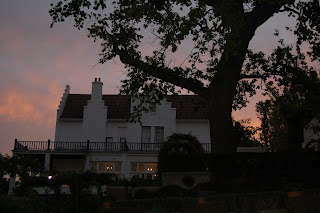 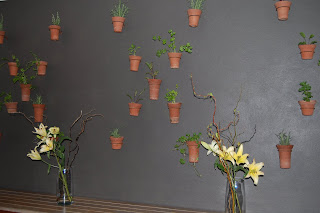 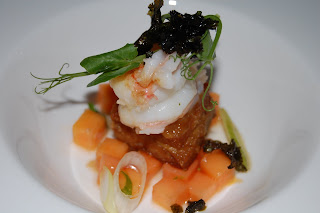 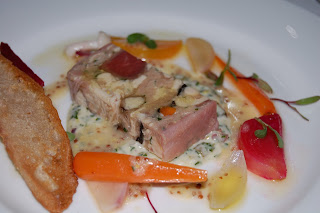 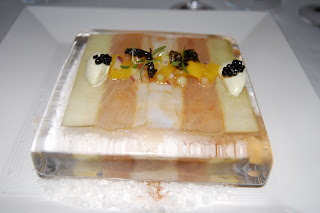 The Liz McGrath consists of three hotels: The Marine in Hermanus, The Cellars-Hohenort in Cape Town and The Plettenberg in...Plettenberg Bay. They have recently brought in Peter Tempelhoff as group executive chef and he has redone the menus of the hotel's restaurants. On Saturday night I celebrated a special occasion by taking The Dragon to The Greenhouse which is at The Cellars Hohenort. Shall we..?
Firstly, I would highly recommend arriving for any booking early to take a walk around the hotel's gardens, and quietly laugh at how ridiculously beautiful this city we call home actually is. As well as the beautiful flowers you can stop and appreciate the vegetable garden. There is something awesome and comforting knowing that ingredients you see on a menu were picked a few metres away.
After we had perved Mother Nature for about half an hour we took a seat in the hotel's bar, Martini. The decor is a lot funkier than you would expect - oversized lamps, quirky wallpaper, polka-dot-prints on upholstered wing-back chairs etc - and it reminded me a lot of Planet Bar at The Mount Nelson. (Remember that place? Friday nights there were mental at one stage.) I had a dirty Martini which was superb and was more-than-impressed with the "canapes" that were offered. White tomato soup, crumbed goat's cheese and the smallest chicken kebabs I have ever seen. Honestly, making them must have been a job reserved for a special kind of asshole. Someone who had pissed the head chef off badly.
I had a quick look at the menu but already knew what I was there for. With another mountain run with The Gym Nazi that morning under my belt I wasn't settling for anything less than the 7 course tasting menu. And yes, I was going to pair it with wine. The pain in my legs every time I stood up told me I had earned it. Now, I could go on and on and on and on about the food but I will try and keep it quick. I will say, however, that the entire experience (and the food in particular) was way more impressive than my visit to Roots. (here)
So what did we eat and drink? Let's have a look:
The meal was R550/head including wine. Without the wine it's R350/head. With the quality of ingredients, and the style of food, with this setting, I reckon that's bloody good value. For birthdays, anniversaries, dinners-with-the-boss, or if you just feel like a good spoil this is the place. I am a fan.
Visit them at The Cellars-Hohenort Hotel in Brommersvlei Road, or call them on (021) 794 2137.
Cheers,
Jamie Who
P.S. I forgot to mention the service which was top-drawer. True, I probably should have worked that into the article instead of tacking it on the end but...well...I didn't.
Posted by jamie who

I thought you would be interested to know, that I visited the Greenhouse Restaurant last night and the scene from the movie "A Fish called Wanda," where Kevin Kline shouts "DISAPPOINTED" sprang to mind.

Our first drinks order took 45 minutes to arrive and they had brought the wrong bottle of sparkling wine??

We arrived at 8pm and were only served main course at 10.40pm.

Although the food was tasty, I could not quite get me head around the portion sizes. Now dont get me wrong, I can appreciate the concept of 'Nouvelle Cuisine!" BUT COME ON??? Those portion sizes in relation to price were absolutely childish, my lamb looked like it had been on 'The Weighless program' for the last decade???

Decor was pleasant and I might consider going back for a drink at the bar, as the cocktails are pretty good, but I definitely wont consider dining there again!

hmmmmm,,,, i guess my stinking email paid off. I just received a call from the Greenhouse inviting myself, plus my partner for a complimentary dinner..

i used to visit this place a lot with clients and for special occassions but like helen i had 2 really poor dinners recently....let me put it to you this way when the whole table starts clapping when the food arrives on the table need i say anymore....

paying a lot of money and it takes 2 hours to get main courses and then by desert time there are no managers to be seen, the cheese platter served with no crackers or bread...simply not good enough im afraid and i will not be going back