Cafe Dijon - I'll have some of that 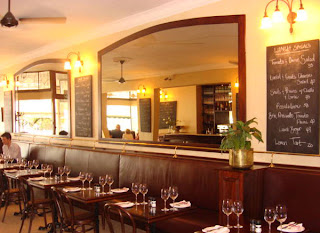 So I was Stellies (you said it was fine if I called it that) the other day doing some work with The Pom. When we were done I was pretty hot - it was 33 degrees that day - and generally a bit pissed off so we thought we would ease into a lunch to calm down. We walked past a place called Cafe Dijon which I remembered a reader recommending. I think his name was Michael. Well, Michael...bravo. You did well. I think I'll call you Mikey from now on. Or M-Tits. Annnnnyway, let's see what all the fuss was about.
As the brighter of you might have already guessed Cafe Dijon is French. I've never been to France but I've eaten French toast and... well...that's basically the same thing. Seriously though, this place is exactly what I would imagine little bistro on a Paris street to look like: leather banquettes, marble-topped bar, black and white vintage prints, a checked mosaic floor, dark wood, chalkboards etc. We sat outside on the pavement which added to the European vibe.
The menu itself celebrates authentic French dishes with things like Sole Meuniere, Coq au Vin and Blanquette de Veau. But the important thing is they do it in a chilled, unpretentious way. We were there for a light unch so I went with the salad of the day which was seared tuna, butter-beans and green beans. It was perfection. Simple, fresh and prepared exactly the way I wanted it. The Pom ordered a baguette stuffed with brie and caramelised onions, which also looked amazing.
Service, you ask? Well...our waiter was surprisingly good for a stoner. The guy definitely knew his food and had just the right amount of personality. I was impressed.
I'm happy with this one guys. Another one to add to Nook in terms of places to eat when in the area. I would have enjoyed a dinner there with a few bottles of wine. Aaah well, next time.
Find them at 35 Plein Street, or call them on (021) 886-7023.
Cheers,
Jamie Who
Posted by jamie who

Agreed, Dijon is a great chilled vibe with some pretty amazing food...Yay for Stellies :p if you find yourself looking for a caffeine jolt in Matieland any time soon, go to Mezzanine - just around the corner from Cafe Dijon. Food's not exactly stellar but their coffee is better than Vida - and that's coming from a Vida junkie...

Jamie
Glad you enjoyed it!
Mikey

Just a heads up - unfortunately Mezzanine has closed its doors. A pity really, coffee was great and general vaab was chilled.
Try Cafe Creme next door to The Nook next time you over this end. Reasonable, even for a student like myself.
Great blog by the way.
P.S. If you havn't already checked this book out, one of the most amazing reads - Ottolenghi: The Cookbook.