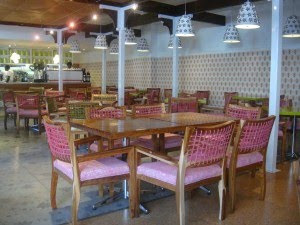 You're going to have to make up your own minds on this one guys. Because I can't work out if I enjoyed my lunch or not...
You'll remember last time I visited the new Cape Quarter Extension and had a bite at Lazari. I left feeling distinctly underwhelmed. Today I chose Voila. So-So, The Bear and I had finished up a meeting in town and were looking for something light but not boring. That is exactly what the Voila menu promised. Firstly, I was very bummed it wasn't an early meeting because their breakfasts looked more than impressive. You know how much I dig a breakfast. Come on, you know that. I'm not shy of a brekkie. It's my favourite meal of the day to go out for I reckon. Anyway, Voila had me making a definite note to come back. They had all kinds of variations of the Jamie Who-favourite Bircher muesli, they had pancakes, smoothies, french toasts, several different scrambled egg dishes, potato rostis and more. I was feeling the vibe. We were there for lunch though so let's rather get into that. As well as salads and gourmet sandwiches, they have a couple of more substantial things like grilled linefish, calamari, lamb burgers, seafood pasta etc.
I went for the seared tuna salad with green-beans and was very, very impressed. The mustard dressing was overpowering but luckily there wasn't too much of it. What did bother me was the service. Or lack of it. I had waited way too long to have to order and once I had finally made an order I didn't see out waiter again. Like, literally. I still don't know where he went. Have you seen him? About 5ft 11inches, shaved head, gold earring, carrying a tray. No?
While I was eating I noticed a note on the menu saying there was a separate tea menu. I even saw some of the breakfast dishes were paired with suggested tea varieties. This - to me - was like waving a massive red flag in front of a bull. I (obviously) asked to see the teas. The second waiter brought me a tea menu as well as a few tiny pots of tea leaves which So-So correctly (and suspiciously) pointed out looked exactly like weed. I explained that I did not think it was that kind of place. I smelt a couple of teas and chose a particular variety to order. The only problem is, I never got the chance. The only time I saw our (second) waiter again was when I asked for the bill. It was a real pity. The whole tea thing has loads of potential but the way it was done was a little bit "amateur-hour" for me. A wasted opportunity.
So, in a nutshell. Food: Very good. Service: Very bad. Price: Medium to long. Decor: Uninspired. (I know they think they have done something funky but the bright-colours-and-white thing is done now. Done.)
Worth a visit? Umm...I think so. Maybe just to see if my experience was a once-off bad day.
If you're thinking of checking it out call them on (021) 421-1237.
Cheers,
Jamie Who
Posted by jamie who

Well, I recently went for dinner. Agree service was dreadful, food was ok, but not at the price point and certainly not noteworthy. Personally I don't like the decor or vibe. I see absolutely no reason to return. 1000 times better and much more satisfying in every respect (and no more expensive) is Bizerca Bistro where I was last night.

Sorry - the above was a 'blonde' moment - I was describing my dinner at Vanilla and not Voila! Too many 'v's' in Cape Q 2!

quite interesting article. I would love to follow you on twitter. By the way, did you guys know that some chinese hacker had hacked twitter yesterday again.

interesting read. I would love to follow you on twitter. By the way, did any one know that some chinese hacker had hacked twitter yesterday again.