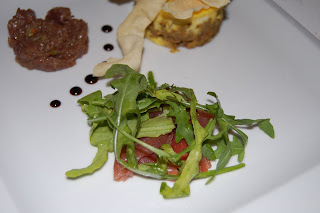 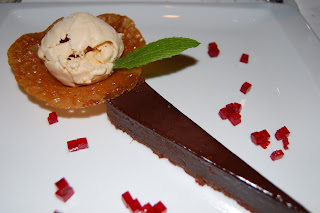 So close. So damn close. That's how I would sum up my experience at Serendipity when I pulled in for dinner on Friday night. I was in Wilderness on a much-needed break and stopped by. I had heard LOADS about this place and was super-excited to check it out. Did it live up to expectations? Well...it's hard to say. At times I was left disappointed, while other parts of the night were unforgettable. Let's break it down.
Firstly, the setting. Driving past the other restaurants in the thriving metropolis of Wilderness I was feeling more than a bit sceptical. Bongo's pizzeria. A place called "The Girls".  The Blue Olive. Monk's. Mmmm...I see. We drove on and found the place. Well, fu*k me. That will teach me to judge a book by it's cover. The setting for Serendipity was probably the most beautiful I have seen anywhere in the country...
A beautiful boutique hotel on the banks of The Touw River is where you'll find it. We were shown to the balcony and while taking in the views of the river, over a beautifully manicured garden and lawns, we ordered drinks. The host then took whoever had arrived (about 8 people) through the menu. He did it with an amazing passion and sincerity and made the whole thing quite theatrical. When he was done we were shown to our table and wasted no time in getting stuck into the 5-course tasting menu. I will take you through some highs and lows.
Highs:
Lows:
You'll see the highs beat the lows and there's no doubt that all things considered I had an amazing night. I guess I was just frustrated because with a bit of tweaking I really believe this place could be one of South Africa's finest. That's what separates places like Bizerca Bistro and La Columbe from the rest. You just know every dish is going to be world-class. Serendipity isn't quite in that league but is still worth a visit.
It's worth mentioning that in a place that seats 26 there were only two empty seats. That's not bad for the first week of November. Most of the tables (all of them except ours and one other) were foreigners and it was obvious that they were digging their night out. Listening to them going on about the food, the staff and the views made me realise (again) what a special country we live in. Maybe I was being a bit harsh? Maybe the slurpie wasn't so bad after all? Maybe...
If you're interested, Serendipity has won bucketloads of awards. If you're feeling the vibe, and you're in the area check it for yourselves by calling 044 877 0433 and booking a spot.
Cheers,
Jamie Who
Posted by jamie who

I found this site using [url=http://google.com]google.com[/url] And i want to thank you for your work. You have done really very good site. Great work, great site! Thank you!