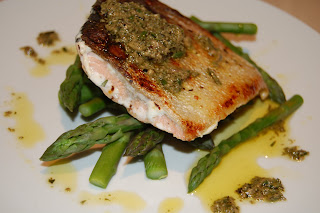 Those of you who know me will be able to vouch I'm not the most modest cook in the world. If something turns out really nicely, well...I let everyone know about it. But that's the point isn't it? That's why I called this blog Jamie Who. To celebrate the fact that anyone can cook these dishes. So I'll tell you what; this dish was one that I made and was actually giving myself compliments as I ate! Make it yourself and you'll see what all the fuss is about.
Okay, stuff you'll need to feed 4:
What to do:
1. Preheat the oven to 200 degrees celsius.
2. In a pestle and mortar pound your rosemary until it is a paste. Add the anchovies and pound some more. Add the lemon juice and a few glugs of olive oil. Season generously with black pepper and mix it all up. (If you don't have a pestle and mortar just chop the stuff up as finely as possible and mix it in a bowl)
3. Place a non-stick frying pan on the stove and heat it until it is smoking hot. Rub the salmon fillets in olive oil and season with salt and pepper. Score the skin of the salmon and cook in the pan - skin side down - for 2 minutes. Turn them over and remove pan. Place pan in the oven for 3 more minutes and remove.
4. As the salmon goes into the oven cook the asparagus in salted boiling water for 3 - 4 minutes. Drain. Mix some of the anchovy sauce into the asparagus and toss to coat.
5. To serve, place a handful of the asparagus in the middle of a plate. Carefully place a salmon fillet skin side up on the asparagus. Spoon more sauce over the fish and drizzle around the plate.
Yeah, as I said, this dish is one of the best I have made. Like...ever. It's a strange combination for salmon which is normally associated with Asian flavours. Sometimes it gets the Mediterranean treatment but I have never tried such strong flavours. A few points: DON'T BE SCARED OF ANCHOVIES HERE. All they do is provide a saltiness and depth of flavour that will blow your mind. DO NOT OVERCOOK THE SALMON. Cooking it this way will leave the middle moist and pink and the outside will be crispy.
Did I mention the entire process takes less than 10 minutes? How great? Try it peeps. It's a good thing.
Cheers,
Jamie Who
Posted by jamie who