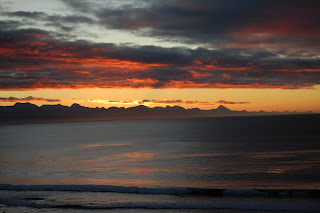 ...I'll take it in the rain. Every time I run a half-marathon I promise myself I will never do another one. This race was no exception and I pretty much hated every step. That said, the feeling when you finish is pretty awesome. That and the frenzied drinking that follows. I swear, people drink like the booze is going to run out. Now, I'm a man who loves the "out the gates early, in bed early" strategy so it suits me perfectly.
The venue for Saturday's celebration was Cornutis in Knysna. It was a fu*king dogshow. They opened their doors at 12h00 and the queueing started straight away. Almost 2 hours later we got a table and settled in. A full review of all the restaurants I've been in over the last 5 days will follow but let's just say we had ourselves a good time here. An interesting point I would like to make to the marketing team at Cornutis: Calling a shooter a Milk Tart is a good idea. Calling one a Sowetan Toilet is not such a good idea. I rsvp'd noooo to the latter when it was offered.
Now, I had myself such a good time at The Oyster Fest that I'm actually writing this from my balcony in Plett, where I stayed last night. (Not on the balcony...just in Plett). That's right peeps, I'm still here. So, again, I am sorry for the lack of posting but I'm sure you understand. You understand me so well.
I'm driving back later today so hopefully my brain will be fully functional tomorrow. Stay posted.
Cheers,
Jamie Who
P.S. What did I do on Sunday? Went for a run on the beach. As you do...
P.P.S. The photo is of sunrise this morning. Not kak.
Posted by jamie who

I cannot believe you went for a run on Sunday. Trying to loosen up the legs? Did it work?

It did not work Mike.Ballsy but not too effective...