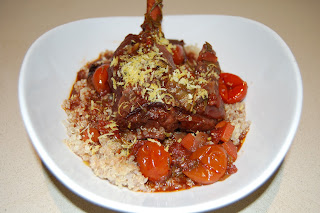 So, The Rentals came round for dinner last week just as the weather was turning from glorious to pretty gross. I wanted comfort food but I also wanted to dress it up a bit so I came up with the gem that follows. The fact that I could use quinoa to keep it healthy was a bonus and I really enjoyed the lemon which cut through the lamb perfectly. Everyone was amazed that I had found time to make it but to be honest all I needed was half an hour between meetings (which came at about 4 o'clock) when I rushed home, prepped everything, chucked it in a pot and threw it in the oven. I didn't touch it again until we ate 4 hours later. That was more than enough time.
Okay, stuff you'll need to feed 4:

Okay, what to do:

1. Preheat the oven to 160 degrees celsius. (If you only have 3 hours, 180 degrees.) Pour some flour onto a plate and season with salt and pepper. Dip the shanks in the flour and shake off any excess. Place the shanks to one side.

2. In a deep, heavy pot brown the meat in some olive oil until they are nicely coloured. Remove and set aside.

4. Add the shanks, the water, the prunes, the fresh and tinned tomatoes and the port and bring to the boil. Season generously and reduce the heat so that the liquid is gently simmering. Cover the shanks and place them in the oven. Cook for as long as possible.

5. Take the cooked quiona and stir in the juice of three lemons and the zest of two. To serve, place the quinoa in deep bowls and place a shank on top. Spoon over some of the amazing sauce and garnish with the remaining lemon zest.

I would say 3 hours is the minimun cooking time if you want this dish to really be worthwhile. The meat will be falling off the bone and the flavours will be phenomenal. As with most of my winter recipes, the longer you can cook it the better. Just reduce the heat and leave it. A nice little tip: when you are buying the shanks ask your butcher to saw off any unnecessary bone. You are paying per kilo so that weight is an extra cost for no benefit. It's a pleasure.


Posted by jamie who

My I please post your yummy Port and Prune lamb shank with lemon zest quinoa on my fb page and website? (obviously with full credits :)

Of course you can use the recipe. Thanks for having the decency to ask!

A link to my blog would be nice...